An ode to the rave era taking place in Scotland, the year 1994.
Black-and-whiteish giving a tone of a good story from the past.
Massive soundtrack and the scene of the rave party is totally mad, the best ever featured on a film!


Due to my excitement and support for this film, I had an interview with Kieran Hurley co-writer of the film and the man who launched the idea of 'BEATS' kicking off with a theatrical live play. You can read it here: glowkidmusic.blogspot.com/2019/10/beats-...te-ravespotting.html 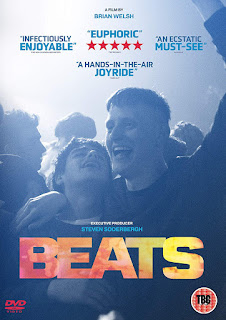